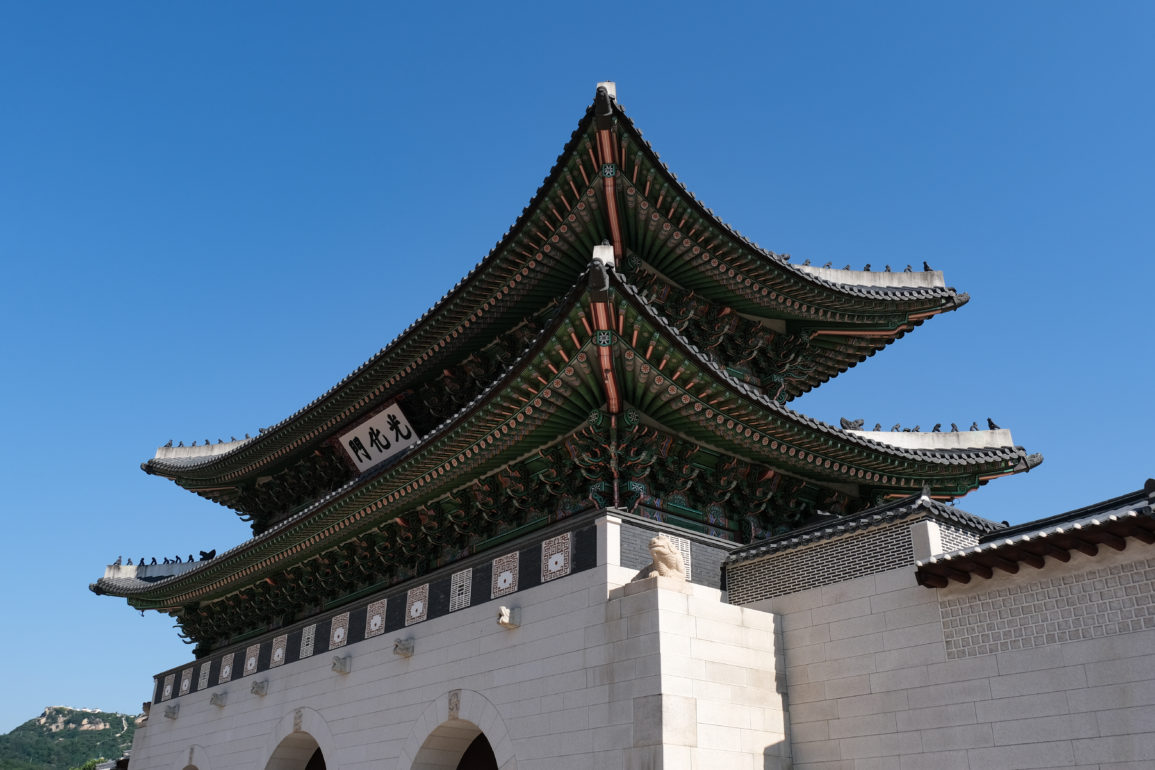 It’s on every tourist’s list when they are coming to Korea. The huge royal palace is indispensable, iconic and did I mention it?, huge. Built-in the 14th century, it was, like the other four palaces in the capital, burnt down when the Japanese invaded during the 16th century. Rebuilt in the 19th after more than two years of abandonment, tragedy struck down again only four years later with a new fire. Opened to the public since 1954, successive restorations have taken place and are still underway. Therefore it’s the best ‘preserved’ palace in Seoul.

It’s not my favorite palace, I rather spent time in Changdeokgung and its garden but it’s clearly impressive. First, obviously because of its size, you’ll need several hours to see everything but also due to its magnificent gate at the main entrance and then because of where it is, with the mountains in the background and the heart of Seoul on the other side with the city hall, Gwanghwamun, the big avenue and the statue of King Sejong, the most popular leader of the country (creating Korean has something to do with it). Not to forget the famous hanok village, full of little streets of traditional houses, is only a few minutes away.

It took me four months to finally enter the palace, not really into the huge touristic places, always full and loud but I don’t regret visiting. I spent an entire morning strolling around the buildings and enjoyed the perfect weather near the pond inside, by far, my favorite place there.

One thing that I managed to miss (pretty impressive as I lived pretty close for six months…) is the changing of the guards. Unlike Buckingham Palace, these guards are not really working to protect the palace, and the two daily changing of the guards are just for shows. Dressed up in traditional and full of colors clothes, they embody the past of Korea. (10am and 2pm when the palace is open, around the main gate).

Another thing that I can’t talk much about is the two museums inside the palace: the national folk museum and the national palace museum. I often like going to museums but I wasn’t in the mood for those (probably my mistake) but I didn’t want to go somewhere just to write few lines on this blog or post a few pictures on Instagram. But I still want to mention them as some of you might be interested.

National Palace Museum: https://english.visitkorea.or.kr/enu/ATR/SI_EN_3_1_1_1.jsp?cid=268178 (official website is only in Korean)

Both museums are free, admission is included in the ticket of the palace.

But there’s something better than Gyeongbokgung during the day, it’s of course Gyeongbokgung when night falls over the city. That’s when things get a bit tricky. The palace is only open at night for a few weeks during the year, usually between the end of April to the end of October. The dates for 2020 haven’t been announced yet, they will depend on the reopening of the palace after the virus’ crisis is behind us. Still, some information for the next years (if nothing change)

– Foreign visitors can’t buy tickets online or in advance, you need to come to the palace before the opening (between 7 and 7.30 pm depending on the month). Come way earlier, the number of places is limited and it’s full every night. I went there one hour before the opening and half the tickets were already sold.

– You cannot visit all the buildings, I’ll stay that half, a bit less, is visible during the night visit but the beauty of the buildings lit up by the lights is completely worth it.